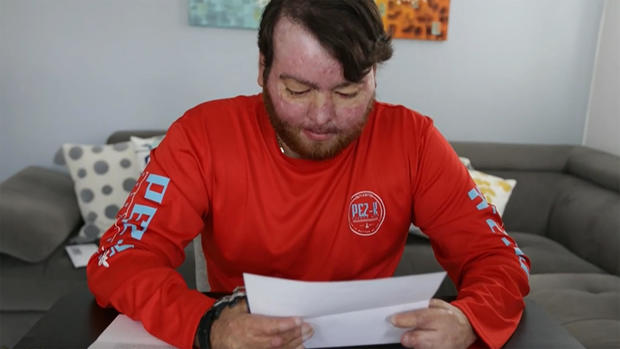 A Puerto Rican man who suffered burns over most of his body in a gas explosion and was treated at a US military hospital in Texas, and then received a government bill for $ 1.7 million, had his medical debt canceled.

As “CBS This Morning” reported earlier this year, Alexis Hernandez, 25, a Puerto Rican resident who was studying medicine in Mexico, was billed for his treatment at a burn center located at Brooke Army Medical Center in San Antonio.

Anna Werner, CBS News consumer survey correspondent, told us the story of Hernandez, who has been waiting almost two years for someone to help with the massive bill. And now, after two members of Congress responded to our show, Hernandez has received good news: Military officials have waived the bill, courtesy of the Department of Justice.

“Now I know anything is possible,” Hernandez said.

Werner asked, “How do you feel now that this weight has been taken off your shoulders?” “

“I feel good because I have 1.7 million reasons to smile! ” he has answered.

A gas explosion in his apartment had left Hernandez with burns covering more than 70% of his body, and he was sent for specialist treatment at this burn center. He spent seven months there and underwent 19 surgeries.

And as he told us earlier this year, “It was really painful. I can’t express in words how painful it was.

With a $ 1.7 million bill hanging over his head, Hernandez potentially faced life-long debt and feared he would never be able to return to medical school. “I will not be able to pay it,” he said.

After Werner shared his story, Puerto Rico-born New York Congresswoman Nydia Velazquez wrote to the Treasury Department asking for the bill to be forgiven.

“It could happen to any other person, any other American,” she said.

Cases like Hernandez’s are the reason Castro launched legislation, which was passed last year, that allows military officials to waive medical bills for civilians unable to pay who have received “medical treatment.” ’emergency’.

“A lot of times people are oblivious and don’t make a decision as to which hospital to go to,” Castro said.

He said there was a good reason why the bills of civilian patients who cannot afford to pay should be waived: “This is a training hospital where members of our military train at the hospital. trauma treatment, ”Castro said. “And so there is an advantage for the United States government and the military to be able to see these patients. And yet it was really ignored when people were charged. “

Despite the change in law, “CBS This Morning” found that some people were still waiting for a waiver.

Ernest Faris, a 52-year-old welder from Fisher, Texas, suffered a broken neck in August 2018, after falling about 20 feet from a ladder. Emergency responders flew him to the trauma unit at Brooke Army Medical Center, where he stayed for a week.

“Just remember you are in real pain,” Faris said. “They put pins and screws in my neck. He broke it in two places, I believe. So, I am extremely lucky to still be alive.

“It would have been impossible,” Faris said. “There wouldn’t have been a way, and I told her over the phone. I said, ‘Ma’am,’ I said, ‘I don’t even earn that much a month.’

So earlier this year the government started to garnish his salary, taking over $ 470 each month.

Faris said the government also seized his tax refund and that with interest and penalties the debt kept growing. It now stands at over $ 159,000. “It doesn’t make a hole, so I’ll probably never get paid,” he said. “I mean, you work your whole life so that you can retire someday. I’m just trying to get on with life the best that I can, but, you know, knowing it’s there, it’s pretty sickening.

Brooke Army Medical Center officials did not respond to our questions regarding Faris’ case, but said they were working “diligently to educate patients on the billing process” and were following “regulations and federal debt collection policies “.

A Treasury Department spokesperson told CBS News: “By law, when agencies, including the Department of Defense, initiate claims, the Office of the Tax Service is required to assist in the collection of claims. valid debts. The Bureau of the Fiscal Service works with federal agencies to ensure that those in debt are given proper advice and opportunities to challenge their debts as well as have the ability to repay their debts over time. Federal laws prevent the Bureau of the Fiscal Service from commenting on an individual’s case.